How to triple revenue in 6 weeks: Lessons we learned from the Weirdly #growthsprint 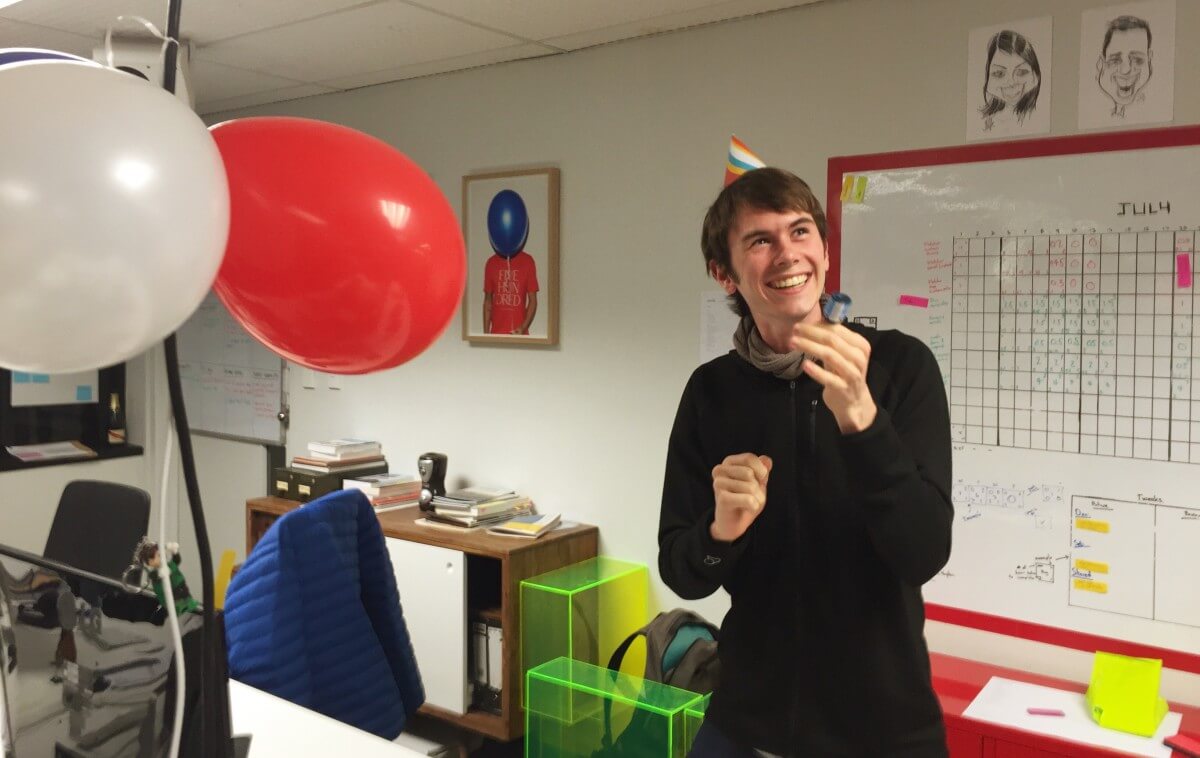 In tech startup land, massive growth is normal. People work insane hours – and like to think that if they’re overworked, they’re more hardcore (read: better than everyone else).The Weirdly team get that, and lots of times, we work mental hours to increase startup sales too. But the very reason we exist is to champion and facilitate amazing work place culture, so we’ve always approached this zealousness carefully. We want our people to feel good about work. We believe maintaining relationships with their spouses, kids and friends is good for business. Heck, we even think they should be able to cook themselves dinner every so often instead of hooning the lactation cookies we seem to always have in the office.That healthy approach to work had to go on that back burner during our six-week #growthsprint. If you weren’t reading around the middle of July, this was in all-intensity-all-the-time focus on sales and growth. You can read more about it here. Oh any by the way, Dale turned 40 and Seb turned 18, we co-hosted an HR event, I worked through an impacted wisdom tooth because I didn't have time to go to the dentist, everyone had the flu, we negotiate our most complicated contract to date, we rebuilt our entire quiz-building process, half of our people were on holiday and we exhausted our supply of confetti canons. So yeah. It was a busy time.The first of September meant the end of #growthsprint. And, looking back at the results we can confidently claim that it worked. We tripled revenue over two months - it was a great way for us to achieve a huge amount of growth in a short period.Our team were absolute champions and we had our best two months of sales ever. Best of all, there are now a pile more companies who are committed to using Weirdly and putting organisational culture fit at the front of their hiring process - including one of our major banks, one of NZ's biggest retailers and loads of small and medium businesses from all around the world.But man, talk about exhausting.Now, almost two weeks later, we’ve recovered enough to view the experience with some perspective. In the spirit of honestly sharing this whole techy startup adventure with the world, here are a few things we learned – and that we’d do differently next time. If you're a tech startup looking to do something similar, read this first:

1. Six weeks is too longTo be honest, six weeks was a bit of an arbitrary number and in retrospect, it was too long. We were working double shifts – we’d meet up in the morning to plan our day’s work, then have another catch up at 6pm to plan the work we’d do from home that night. We were up at 4am and in bed after 11pm with all the hours in between spent heads down, bums up – no friendly chit chat, no checking in on the world, no lunch away from our computers. That’s what the whole thing was for. We were ready for it. But, we realise now that you simply cannot maintain that kind of intensity for that long. By week five our productivity was shot, and creative energy was nil. It’s the law of diminishing returns – a shorter period would probably have gotten us similar results, with much less fall out.

Our initial goal was one new paid sign up every day of the sprint. The night before we kicked off, I got the nagging feeling that we were being light on ourselves. So, in a fit of bravado, I waved my arms in the air and yelled “double it!”I was right about the first goal being too easy – we blitzed past that no problem. But the doubled figure? It was out of our grasp, and we probably knew that from the start. It took a lot of pep talking to keep the momentum up and then, when killing ourselves did nothing to stop the numbers falling behind everyday, it was disheartening. I think about what the mood would have been like on the last day if we’d set ourselves a more realistic goal. Even if the numbers were the same, it might've made the whole thing feel like a real win. Maybe we would have come out the other side feeling energised and enthusiastic, instead of exhausted and a tiny bit disappointed.

On the whole, the idea that creating a pressure cooker would give sales a jolt and get us over that tricky pre-funding hurdle was a good one. The tight time frame combined with heavy targets meant we didn't have time to agonise over decisions. We were operating on gut; ideas were dreamed up, executed and tested within a few hours and those that didn't result in immediate runs on the board were discarded. We were laser focused on activity that made the needle move - that means we didn't spend time finessing designs, carefully crafting marketing messages or working long-term (read: larger contract) sales opportunities. This was about hustle, pure and simple, and the pressure generated results.

The pressure generated immediate sales results, but that "just get it shipped" mentality didn't allow for much care to be taken with the marketing and product development we were churning out. We sent a tonne of new features out the door during the 6-week sprint. Not allowing time to carefully consider design meant the user experience of some of them wasn't up to our usual standard. We're a team who are fiercely proud of creating a beautiful product - some of the UI decisions we had to make weren't easy. And it was the same story with marketing - necessary, but difficult compromises were made in the name of immediate traction.

This might seem a bit obvious, but it’s heaps easier doing these intense growth projects when you’ve got all hands to the pump. In our case, two of our four founders were away for a fair chunk of the sprint and we also had one of our two-man dev team on holiday for a week. At the time, that amounted to half our team so we knew adding a high-pressure sprint into the mix was going to put more weight on the people left behind. The timing wasn't perfect, but re-fueling breaks are important and these were trips that were booked well before #growthsprint. It’s just something that we’d try very, very hard not to do again.The great thing was when they got back, they were fresh faced, bushytailed and ready to pick up the slack from the rest of the wild eyed, unshowered team. So while it wasn't ideal, half the crew being away had a secret benefit - it meant we had (accidentally) held something in reserve.

And your best friend, and your siblings. They’re already your biggest fans, and even though they may be a bit biased, there’s still power in that advocacy. Lose the cringe, and ask your mum to tell the world how cool she thinks you are. You never know who she talks to at the Citizens' Advice Bureau, or who she’s friends with on Facebook.

Selling was exhausting for us, and it was exhausting for our networks too. People have a lot of good will for Weirdly, and we needed to be a bit protective of that. While we made long-term brand compromises in the name of short-term sales, we still tried to come up with ways of pushing ourselves that were also interesting and relevant. Marketing 101 stuff, sure, but it’s surprisingly easy to just turn into spam monsters when you’ve got targets breathing down your neck.

During the sprint, I had my spouse on board for the six weeks as my support crew. She was waiting by the ring’s edge to tape my split lip together, rinse the blood out of my eyes and give me a rousing speech. Dale’s partner was away. She had no one picking up the slack at home. No dinners delivered, no grocery shopping or laundry, and most crucially, no one to off-load to at the end of the day. The difference that made to each of our emotional and physical well-being was enormous. So get your partners on board and remember it really sucks playing maid to an absent spouse, so agree on how long you’ll be under the pump and thank them heaps. You need them. Trust me.

You’ll be surprised what people are keen to do once you swallow your pride and ask. The best tactic we took was asking friends and networks to sign up for a free account to give us some feedback on the system - even if they were people who would never become paying clients themselves. We then followed up to ask if they could think of anyone who might see some value in using Weirdly and explicitly asked them to share the link amongst their own networks. Setting aside a couple of hours each day to make these personal requests to people we know really paid off and stretched us well beyond our own friend and family network.

We were releasing a significant new feature every week – that’s a pretty insane thing to do, so our product team were under some crazy pressure during #growthsprint – and that's a wee danger zone to watch out for. The founders were motoring too, but we’ve all run businesses before and have experience in these pressure-cooker scenarios. We know how to manage stress successfully and when to ease up before we burn out. Our product team are young – they wouldn’t necessarily spot the signs of an immanent physical or emotional break down and hadn’t developed the tools to cope with high stress. Helping them stay aware and manage this was really important, for us and them.

Celebration is a big part of our culture, and thank god, because during #growthsprint, we really needed it. Overlaying all that pressure and stress and hard work with mini celebrations meant we kept our successes – and failures – in perspective. When you externalise your goals and make a big deal out of them – even if it’s crossing another $99 package off the window and stopping for a team fist bump, it can make everything suddenly feel like it’s all worth the effort.Even though it took a pretty heavy toll, creating an intense, growth-focussed, company-wide sprint was a really effective way for us to increase startup sales. It propelled us up into another level and we finally achieved that elusive hockey-stick graph we've been chasing for the past year and a half. Our advice to past ourselves though (and you if you want it) is to use this kind of high intensity tactic carefully - remember it should feel like a sprint, not a lifestyle.

If you didn't sign up while we were doing #growthsprint, you can still do it now! Click to set up your own free trial (it takes about 30secs) and take Weirdly for a hoon.