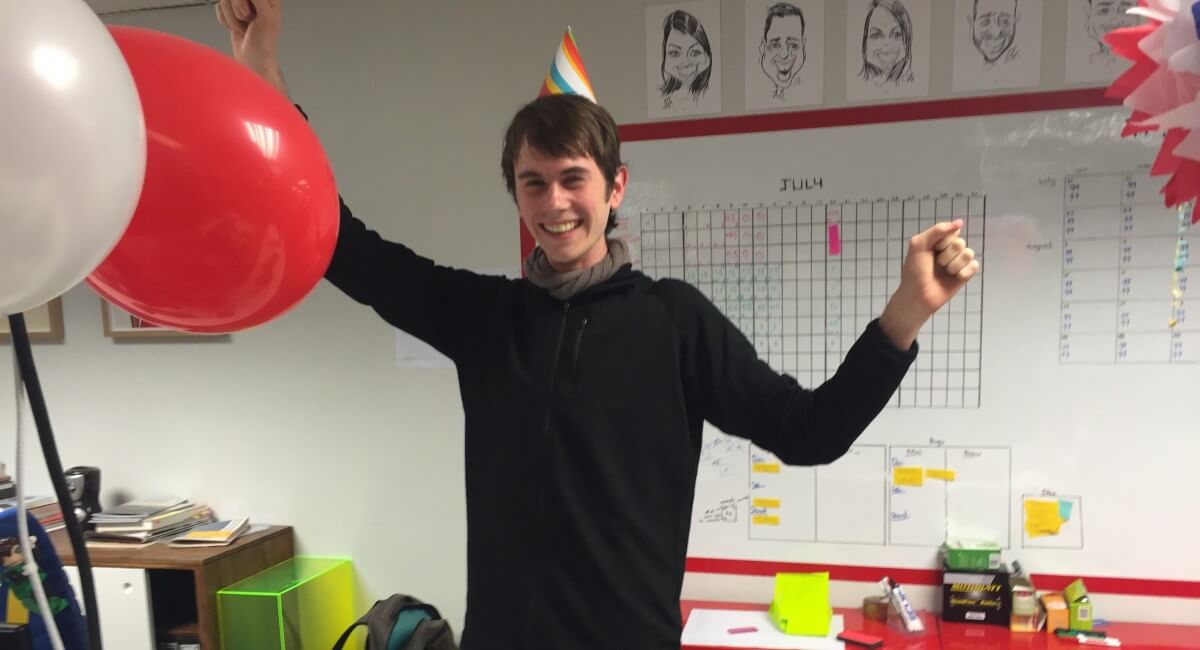 About 6months ago our resident boy-wonder, Seb, joined our posse, but now he's off on the next adventure - to Princeton. Take note of this name everyone, this guy will run the world one day:My name is Sebastian Hallum Clarke, and I’m one of the developers here at Weirdly. I joined the team in late January, straight out of high school. Over the past six months, I’ve had the privilege of working with a fantastic, top-notch team to build some amazing features for our users. From our complete re-imagining of the system for Weirdly 2.0, to third-party integrations (Trade Me Jobs and embeddable quizzes), to the quiz generator and quiz report, the product team has been full steam ahead![caption id="attachment_3821" align="aligncenter" width="502"]

Turning 18 on Bastille Day at Weirdly calls for Tequila Shots and Croissants.[/caption]One thing I find frightening is the thought that I very nearly didn’t take the job at Weirdly. I was initially brought onboard for a specific project to build a custom quiz template for one of Weirdly’s clients. (Basically, I received a static picture of what the final quiz was supposed to look like, and it was my job to build a real-life, actual working website that candidates could use to apply for the client’s graduate recruitment programme.)I had fairly substantial software development experience (I’d been building Mac apps for a number of years), and I thought I had decent web development chops. Unfortunately, once I received the brief for the custom quiz template, I quickly felt out of my depth. I feared I wouldn’t be able to complete the task, and I struggled to make heads or tails of the code that had been started by another developer.I was sitting on my bed at home, trying to see if I’d be up to the job. What’s the difference between padding and a margin? How do I tilt things 35°? I was throwing up Javascript syntax errors left and right, and not getting very far at all.Feeling defeated, I called my mum at work and told her of my frustration. Was I actually a good enough developer? Loving and sympathetic though she was, she was unable to actually help solve any of the problems I was facing. Gah. I toyed with the idea of writing back to the folks at Weirdly saying that I wouldn’t be able to take on the project – no contract had been signed at this point.I kept trying, and eventually – somehow – things started coming together. I worked out how to use jQuery to get things to move around the page. Gradually my code began to look more and more like the design I’d been given, and shortly before dinner, I was feeling confident enough to write back and confirm my acceptance of the project.A couple of weeks later and after dozens of revisions of the code, the website was done! I felt really proud, and the client ended up receiving over 400 job applications through the custom site I built. Weirdly hired me on a more long-term basis, my remit expanded, and the rest is history!I’ll always remember how close I was to giving up – how close I was to passing on what has been an incredibly transformational, educational, and exciting six months. I’m so thankful that I persevered, and for everything that has come since.Stay weird, weirdos. ?Sebastian leaves Weirdly at the end of this week to begin his undergraduate study at Princeton University, where he plans to study computer science and finance. One day, he hopes to found his own startup. You can learn more about Sebastian’s journey on his personal website, and follow his adventures on Twitter as @sebthedev.